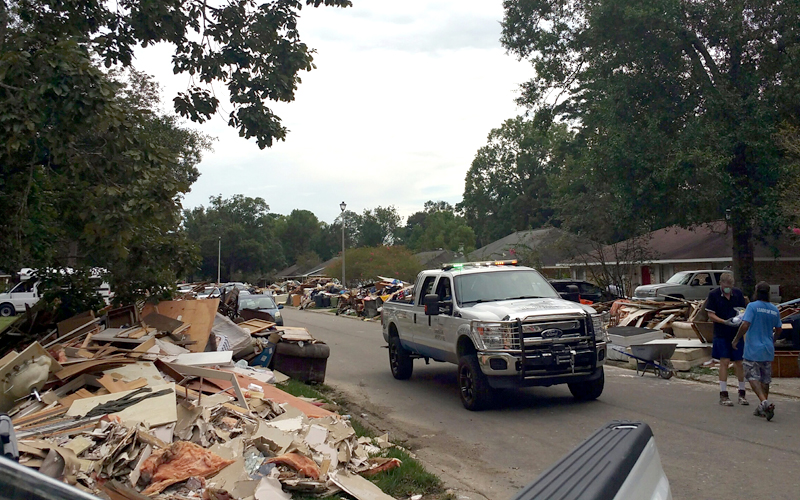 Troy is the operations manager for a company out of Cincinnati Ohio called Teasdale Fenton Carpet Cleaning and Restoration. After massive flooding hit the State of Louisiana, Troy and his team traveled down to help in the repair. The damage was extensive. Together with local news stations and a group called Matthew 25, Troy and his team were able to expand the relief efforts. Troy also reached out to the Benefect Community Fund for cleaning supplies for the volunteers to use.

Here is an update from the Matthew 25 website at the time of the flood:
Matthew 25: Ministries is responding to historic flooding that has deluged Louisiana.  Parts of Louisiana have been submerged by up to 25 inches of rain since Friday. While the weather is improving, flooding will continue to be a problem for days to come, with water receding in some areas, but still rising in others. Over 40,000 homes have been affected by the flooding.  Approximately 8,000 people remain in shelters and more than 30,000 people have been rescued from floodwaters across south Louisiana. At least 13 people have died as a result of the flooding.

Teasdale Fenton assisted in the restoration efforts while Matthew 25 coordinated and distributed care kits to those affected by the flood. The Benefect Community Fund was able to provide Disinfectant to help with the cleaning efforts.

Matthew 25: Ministries has been responding to domestic disasters since Hurricane Katrina in 2005.  Since then, Matthew 25 Disaster Response Teams have continued responding to domestic disasters including hurricanes, storms, tornadoes and floods as well as droughts, wildfires, chemical spills and water contamination with millions of pounds of desperately needed aid.
http://m25m.org/disaster/louisianaflood16/

Teasdale Fenton is a premier Carpet Cleaning and Restoration firm servicing greater Cincinnati and Dayton. They offer a wide range of cleaning services as well as 24-hour
emergency response to problems arising from water, fire, mold and messy pets.
http://www.teasdalefenton.com